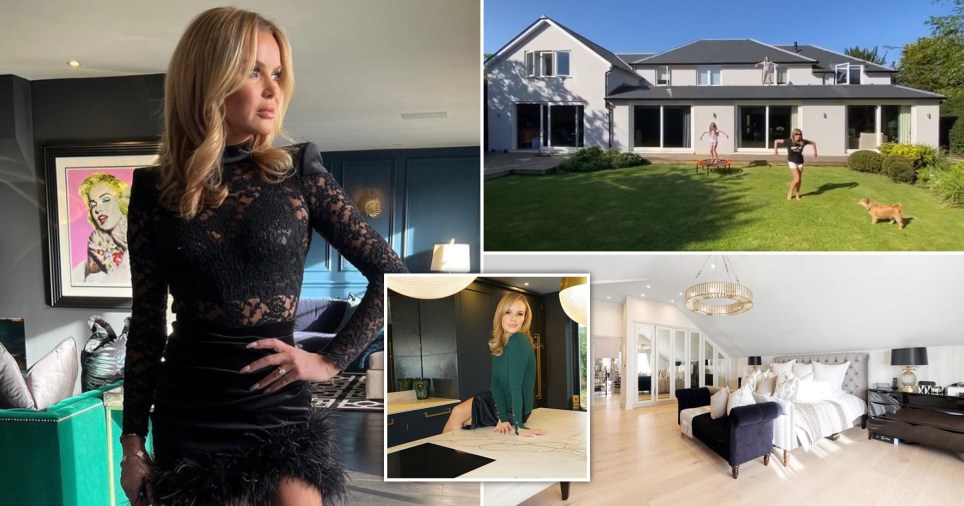 Amanda Holden has put her idyllic Surrey mansion up for sale after seven years, and the £5million property has a lot to offer for any buyer.

The Britian’s Got Talent judge, 51, and her husband Chris Hughes, bought the five-bedroom property seven years ago for £3.5million, meaning that if they achieve their asking price, they are set to make a tidy £1.5million profit on their home.

The home boasts five bedrooms, three bathrooms, a study and an enormous 30ft x 27ft living room – perfect for entertaining friends of just settling in to watch BGT on a big screen – as well as a lavish kitchen-diner.

The property also has beautifully maintained grounds as well as a hot tub – which has often featured on Amanda’s social media.

Amanda recently added an outhouse to the grounds of the property with a log burner and comfortable sofas, as well as another bar, a large wooden decking area and a palm tree she planted in memory of Sir Captain Tom Moore.

She also created a walk-in wardrobe for her and Chris in one of their bedrooms, having been inspired by Sex and the City, including a remote controlled light-up mirror which goes up and down.

The home is also protected by two sets of private gates which lead onto a private road towards the house, with a large driveway able to hold several cars.

A source told MailOnline: ‘Amanda loves her family home and is really proud of the work she’s done on it.

‘She’s had a real hand in the makeover and has enjoyed seeing her ideas come to life.

‘It will be a sad day when she moves out but Amanda can take comfort in the number of memories she’s created there.’

The couple had previously described the house as their ‘forever home’ and had ‘badgered’ the former owner to sell it to them for years until they were finally able to purchase it.

Amanda previously told House Beautiful that she wanted her house not to feel like a ‘show home’, adding: ‘We have two little girls and don’t want them feeling that they’re treading on eggshells.’

She added to The Mirror: ‘I am house proud, but I’ve got two kids, two dogs and a cat, so it’s a family house. Everything is washable and wipeable.

‘It’s so open plan my littlest can cycle her bike around. I don’t have carpets on the ground floor – and this is disgusting – but I was doing an interview a while ago and my puppy pooed on the floor during the chat.

‘But you don’t worry if you have wooden floors. Two words: wipe clean.’

If you’ve got a celebrity story, video or pictures get in touch with the Metro.co.uk entertainment team by emailing us [email protected], calling 020 3615 2145 or by visiting our Submit Stuff page – we’d love to hear from you.