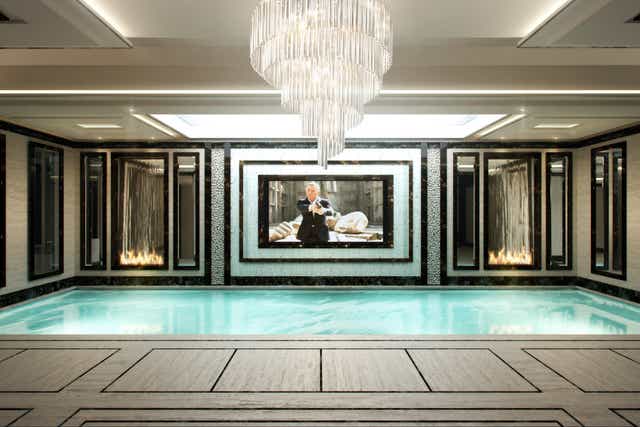 his year, London had the highest number of luxury properties sold anywhere in the world, despite pandemic chaos and travel restrictions limiting the movements of the super-rich.

International high-net-worth buyers are the usual bread and butter of the capital’s uber-prime property market but in 2021, aided by the drop in competition, Londoners were snapping up mega mansions instead.

Meanwhile, overseas buyers had their appetites for London property whet by video tours, social media posts and the relative cheapness of the pound.

All this, and more, is documented on a new series of Channel 4’s Britain’s Most Expensive Houses, which goes behind the scenes of high-end estate agent Sotheby’s International Realty, as brokers show properties to clients, including a developer of heritage trophy homes, a London-based Russian cosmetic surgeon and a banker-turned-£20,000-bespoke-shoe-maker.

Some agents net a sale over the course of the four episodes, others are just at the beginning of what can be a several year journey from listing to completion.

Now Homes & Property has been given exclusive access to some of the capital’s most extraordinary multi-million-pound houses featured in the show. Join us as we take a tour — and find out just who buys London’s most expensive homes.

It was bought by super-developer Kam Babaee, chief executive of K10 Group, who has spent four years and £28 million (including £580,000 on the Portland Stone central staircase) renovating the house into an eight-bedroom, 15,300sq ft mega mansion with a triple basement.

Work is nearly complete on the house, which now has two cocktail bars, a 12-metre swimming pool and an outdoor living area with a fireplace, television and kitchen, says Babaee, who is looking for an agent to sell this one-of-a-kind home.

Will Sotheby’s get the instruction? Watch this space…

Formerly Edith Piaf’s “love boat”, on which she conducted a secret affair with her married lover, boxer Marcel Cerdan, is being sold by its current owner, celebrity hypnotist Valerie Austin.

The Flamant Rose (pink flamingo) was bought for Austin by her husband, also a hypnotist, 25 years ago as a gift during the early years of their marriage.

The couple used to spend six months a year on the boat, which is moored in Wapping, but Covid has made it increasingly difficult to travel over from their other home in Florida.

According to Austin, Piaf used to do séances on board because it has a very rare iron hull, which is “spiritually electric”. The 150-year-old boat has one cabin, decorated in a boudoir style with gold drapes, padded cream ceiling and walls, and a free-standing gold bath.

She has also hosted many parties on the boat, including loaning it to Nigel Farage to hold a party for Brexit donors.

Despite the price tag, agent Shereen Malik describes the penthouse of this brand new tower in Southwark as “a bargain”, saying that if it was north of the river it could cost four times as much.

She is selling the 4,500sq ft flat with eight-metre ceiling heights and 40ft windows in a shell and core state, meaning it is a total blank canvas for a potential buyer to put their personal stamp on.

Malik enlists interior designer Dara Huang to envision a look for the penthouse to tempt her private young entrepreneur buyer to commit — he lives abroad so can only view the space via video tour.

Huang is used to giving super high-end clients whatever they want, from home cinemas to baby shark tanks and even S&M rooms — “we’re very professional about it, we don’t flinch”, she says.

This two-bedroom penthouse is currently owned by a “famous actress”, who has personally customised the interiors herself, including with a painted rainbow over one of the distinctive Gothic window arches.

The apartment has the only painted ceiling in what is one of London’s most iconic buildings, and where the Spice Girls filmed the video for Wannabe on the pre-renovation central staircase.

A new-build mansion in south-west London, Langdale House has a wine cellar with space for approximately 1,000 bottles of wine, a games room with jukebox and projector screen and a basement flat for staff or family.

Opes Financial Partners get the tour in the hope they’ll open their little black book to recommend the property to a millionaire buyer.

The mortgage brokers reckon they could secure a 70-85 per cent mortgage, meaning a buyer could need a deposit of “only” £1.5 million.

Why would a multi-millionaire want a mortgage? Whereas the average buyer needs a mortgage to buy a home, for the super-rich borrowing the money to buy an asset and investing the money elsewhere can make them a profit, explains Masood Rashid, Opes director.

Karl Chu likes “food, good whisky, cigars and clothes”, says Polina Shchepetkova, head of the Russian desk at Sotheby’s. Chu runs Ascot Shoes of Savile Row, making bespoke shoes from rare leathers which can cost as much as £20,000 a pair, and is looking for a three-bedroom bachelor pad for £9 million.

Shchepetkova shows him a new-build, three-bedroom apartment on Curzon Street in Mayfair with £25,000 wardrobes and an entire dressing room but it is too small to display Chu’s shoes — all 500 pairs of them.