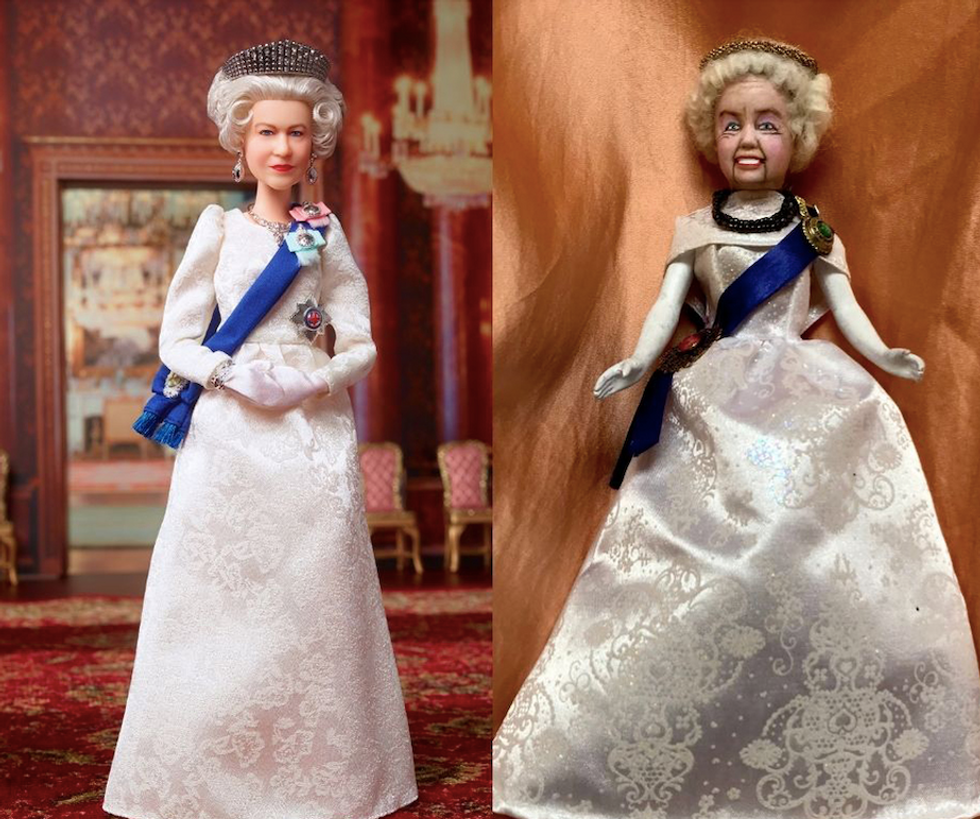 A quirky portrait artist has paid homage to the Queen to mark her Platinum Jubilee by creating a “wrinkles and all” doll of Her Majesty using a remodelled Barbie.

Queen Elizabeth II is the latest subject former theatre designer Lou Gray, 61, has brought to life using either a curvaceous Barbie or a musclebound Action Man as her blueprint, since starting her unorthodox portraiture during the March 2020 lockdown.

Inspired by a 2018 commission to decorate a nightclub using a Mexican Day of the Dead theme, where she painted old Barbies to look like skeletal figures and hung them from the ceiling, she put out a Facebook appeal for people’s old dolls.

And the Bristol mum-of-three was soon inundated, saying: “When lockdown happened the theatres shut and there were no parties for me to produce design schemes for, so I needed something to do.

“I asked people for any unwanted dolls and one woman said she had a whole house full of them. She would come over on her mobility scooter and drop them off outside my door.”

Sign up to our new free Indy100 weekly newsletter

She added: “It was so exciting. I started off creating drag queens. The Action Man dolls were so macho, I thought it would be funny to turn them into these incredible drag queens.”

Lou, who lives with her 17-year-old daughter Katie Lawlor and her builder husband Scoob Lawlor, 58, says her dolly portraits were soon in demand.

And she now devotes five hours a day on four days a week to designing and creating people from dolls, which she sells from £50 each through her online business, Lou’s Decorium.

Despite her less than flattering Action Man doll of her husband, based on a photo of him dressed as Superman for a fancy dress party, she says he is a huge fan of her work.

She said: “I made him like Superman because everyone calls him ‘Super Scoob.’ He is always solving people’s problems, so I created him in his Superman costume. He loves it – although, he thinks I have been a little unkind on his hair, which is starting to thin.”

Also subjecting herself to scrutiny, in a self-portrait that shows her wearing her “scruffy” clothes, one of Lou’s proudest achievements is the unique proposal portraits she gave to her friends Abi and Enzo Hill as a wedding present.

She said: “My two friends were getting married, so I created dolls of them and this silly story which I told as I re-enacted their proposal with their dolls on stage on their wedding day in May. It was only a five minute sketch, but I think they loved it!”

Now Lou, who has made 180 dolls so far, is hoping to make enough money from her portraits to enable her husband to retire, even though she admits she finds it hard to part with them. She said: “When I make a doll, I get very attached to it. I don’t really want to put it up for sale at first, because I want to enjoy it for a while.”

She added: “Everyone says lovely things about them. My husband thinks they are great, he is really supportive. My daughter is not a fan, though, she thinks it’s very embarrassing that her mum has hundreds of Barbie dolls all over the house!”

But Lou, whose sons, gardener Finn Waterman, 29, and stonemason Johnny Waterman, 24, also love her dolls, will not let Katie’s opinion dampen her enthusiasm.

Armed with a degree in theatre design, until the 1990s, when she went part-time as an artist working in schools while she raised her children, Lou worked with theatre companies up and down the country, designing sets and costumes.

When her children were older, she then started designing and creating extravagant party sets. This led to her first experience with “doll art,” when she decorated a nightclub for a 40th birthday party in 2018, using the Mexican Day of The Dead theme – when people are briefly reunited with the souls of their deceased relatives.

She recalled: “That’s when I made my Day of the Dead Barbies – painting them all like skeletons. They represented dead acrobats and I hung them from the ceilings.”

Her wacky idea continues to pay dividends today, as she has adapted her skills to create doll portraits. The detailed process involves her first paring back the dolls by removing their factory paint to make them faceless mannequins, before she paints and moulds them into shape.

“Once they are clean, then I can start painting them,” she said. “I always do a lot of research and sketches before I start too, looking at photos of people to capture their essence.”

She added: “Sometimes it’s difficult to make people look like a doll. I recently created one for this beautiful French actor and singer, who was quite unusual looking – very tall and very thin.

“It was hard to find the doll I wanted, so I used a sander to remodel one and make him elegant.” With Lou’s Queen portrait, she based it on the official Barbie doll of Her Majesty ahead of the Jubilee.

She said: “I saw the official doll of the Queen and I just thought, ‘That’s not what she looks like.’ I didn’t want to be disrespectful, as I really do like the Queen. I think she is rather wonderful, but I wanted to do something funny.”

She added: “In my head, I imagined her with this half-naked man in his garters holding her handbag, as her private, personal handbag carrier. So, I made him from an Action Man to go with her, too. I was sat there in my little studio at home, giggling away.”

Ironically, as a child, Lou never had her own Barbie doll. She only had a Sindy, which she felt was “second best.”
She said: “I desperately wanted a Barbie, but all I got was Sindy.

“I would always go to my friends’ houses and play with theirs. I’m definitely making up for that now!” As well as portraying some of her favourite figures, like drag queen Baga Chipz she has turned dolls into everything from circus performers to eco warriors – reflecting her own views as a member of Extinction Rebellion.

She said: “I absolutely love creating the dolls. They are my little people. As I paint them, their stories come to me in my head.”
Lou added: “It feels like doing theatre design again, but I have absolute control. There’s something about the fact they are dolls that appeals to my inner child, too.

“I am involved with an amazing circus troupe in Bristol called the Invisible Circus, so I started to create characters that reminded me of those times. I bought a children’s circus tent, so they had a set and I started to tell their story on Instagram in instalments.”
Meanwhile, her more political dolly tableaux have depicted dying mermaids by the ocean, Ukrainian soldiers at war or she has displayed ‘protest dolls’ on the windowsills of her house, often giving environmental messages.

She said: “My dolls give me a voice. I also like the fact I am using these unwanted dolls and saving them from landfill.”

Lou has even put dismembered dolls’ limbs to good use, by remodelling them to create scary creatures like spiders, which usefully need eight legs. She said: “I made these freaky spiders to be in a freak show in the circus and had them then eating all the animals. It got a little bit surreal and out of hand!”

Now happily lining up portrait commissions, there is one public figure she is still keen to give the doll art treatment. She said: “I am very keen to make a Boris Johnson doll. I want it to be squishy, so I can stick pins in it!”

To see more of Lou’s dolls go to: https://www.instagram.com/lousdecorium/

Have your say in our news democracy. Click the upvote icon at the top of the page to help raise this article through the indy100 rankings.

Kelly
Stretch Of I-275 Closes + 5 New Plymouth-Canton Homes For Sale – Patch
House of the Week: Owner built his dream house on the Liverpool fields where he grew up – syracuse.com