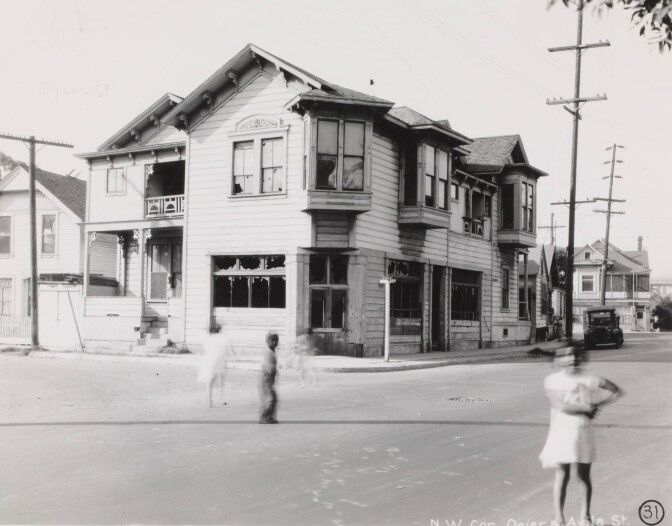 Two moments stand out in the making of a podcast exploring the past, present and future of T. A. Chinatown . One took place nearly a century ago, one more recently.

On a sunny day in the early 1930s, an unidentified photographer, good at his craft, walked a circuitous, though prearranged, route through Chinatown in downtown Los Angeles. He took many photographs, at least 128 of them. It’s likely he referenced a map or set of instructions. It was not the people of Chinatown that interested him, not in the least. It was the buildings. The boarding houses and the businesses, the warehouses as well as the stables, each contributing to a vibrant, working-class neighborhood. The photographer stood in the street to make most of his images, capturing building after building in sequence, one then another and another, as he walked across and through Chinatown. Job done, he or someone else then printed the photographs in 8 x 10 format. Then he must have delivered them to whoever hired him to do the job.

Eighty years later, a rare book plus photograph dealer in Los Angeles contacted Jenny Watts, Curator of Photography and Visual Culture at The Huntington with the words, “I’ve got the box of photographs I think will interest you. ” It was those Chinatown photographs, 128 of them, somehow came to light, safe and for sale.

A block by block, building by building sequence of photographs depicting early 20th century Los Angeles were, she knew, as ‘rare as hen’s teeth. ‘

“It was very exciting, ” Watts remembers. She notes that pictures of Chinatowns in the 19th and early 20th century — L. A. and elsewhere — tend to be stereotypical, formulaic, even racist. The bulk of the photographic record originates from tourists — white tourists — who, cameras in hand, might elect to spend an afternoon espying the exotic sites, sounds and inhabitants in Chinatown. Those photographs documented what visitors were primed and prepared to see. The photographs the dealer possessed were not that. “I’ve never seen anything like these, inch he told Watts (which immediately piqued her interest and curiosity).

When the dealer opened the box, “I was really blown away, ” Watts recalls. A prevent by block, building because they build sequence of photographs depicting early 20th century La were, she knew, because “rare as hen’s tooth. ” What’s more, she quickly surmised, nothing that the pictures depicted remains. It is all gone, obliterated. This version of L. A. ‘s Chinatown got demolished right after these pictures were made in order to make way for the Union Station railroad depot. Every bit as amazing was the fact that the images were meticulously addressed. The professional photographer took care to note, on the images themselves, where he was on this or that street, writing the house or creating number on the printed photograph.

Watts bought the pictures for The Huntington. The entire moment was, she remembers fondly, “so thrilling. ”

The two of us learned of the collection rapidly (Watts is married to William F. Deverell). Once they had been officially acquired plus cataloged, we asked to see the pictures. We were as thrilled about them as she has been. It was clear to the three of us that the photographer had been tied to the demolition process in some way. He was taking pictures of buildings to catalog their presence and appraise their value. We have since learned, thanks to historian and author Marlyn Musicant, that the anonymous photographer likely worked for the Southern Pacific Railroad. That corporation, dragged kicking and screaming to a court-ordered directive that a new rail depot had to be built in 1930s Los Angeles, went about quietly buying up as much of Chinatown as it could. This move prevented others from jacking up real estate prices once knowledge that the terminal would be built atop Chinatown became public.

We knew that we wanted to do something along with — and something about — the photographs. At first, we thought that an exhibit of photographs mounted on a wall would suffice. We could do the research, using the addresses, to note where this residence or this restaurant had once stood (knowing that, for most of them at least, they stood once in the interior spaces of Union Station itself or out back amidst all those tracks).

Studying the pictures, losing ourselves in them — something akin to time travel — was exhilarating. We did our research, we tracked the story of Union Station, but as we did, all of us pondered whether and how we might animate this history plus attract a wide audience. Years went by. In the meantime, we formed a research and collegial collaboration with the Chinese Historical Society of Southern California , which continues to this day. Then, a chance meeting with Professor Scott Fisher of the USC Cinema school happened. That changed everything.

Fisher knows his way around augmented reality — the immersive technology, the visual storytelling — all of it. We showed him the photographs of a neighborhood long ago destroyed. Was there a digital humanities opportunity here? What could we do?

Fisher understood immediately. Given the thorough and meticulous attention to addresses, Scott recognized an opportunity to geo-locate the pictures. It is almost intuitive: match the details to an early 1930s map (easy to do), then carry that cartography forward across time until we all hit Google Earth and its capabilities of pinpointing and plotting spaces. Fisher knew that he could place the 1930s photographs in space by way of augmented reality. He understood that commuters in route to and from their trains in Union Station could, by way of their phones or tablets, “see” the old neighborhood that had once been right there at their feet. Travelers laid over and awaiting departure could do so as well.

There’s more. We have been researching the social history of Chinatown, the lives of all those people who lived and worked well in those long-lost structures. When it is all set to go and to launch, anyone will be able to visit old Chinatown through the augmented reality tools and, while “there, ” will have the opportunity to ask “who lived right here? ” or “who proved helpful where? ”

It’s almost all an act of scholarly and technological recovery plus discovery. Given that history of eviction and destruction we feel an obligation to remember the particular lives of people who once called these spaces and places in Chinatown home. A hundred thousand people pass through Partnership Station every day. It is a veritable neighborhood by itself. We mean for all Angelenos, long-timer and newcomer, resident and visitor to remember and honor the neighborhood Union Station displaced.