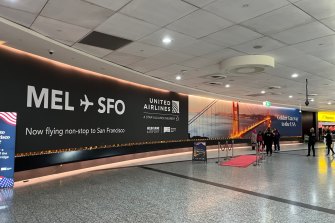 Melbourne Airport has urged passengers to allow a lot of time before their flights as staff prepare for its busiest period since the pandemic began.

They said numbers would be well above the 1.7 million passengers processed in the three weeks of the Easter holiday period.

Airports across Australia have had issues with long lines during busy periods as they deal with staff shortages caused by COVID-19 and flu cases and the large-scale layoffs that happened during the pandemic.

A number of construction works continue at the airport, especially in Terminal 1, which will see some shops closed.

Melbourne Airport’s chief executive, Lorie Argus, said passengers must give themselves a lot of time to be processed before flying.

“We encourage people to allow time to get to the airport, to check in and go through security, as there may be queues, particularly at peak travel times,” Argus said.

“Equally, we’d ask people don’t arrive too early because some airlines don’t open check-in until two hours before a domestic departure and three hours prior to an international flight.

“The aviation industry is still working to rebuild our workforce following the pandemic, and staffing remains an issue for some operators, particularly in baggage and ground handling.

“During this busy period, we ask people to be respectful of one another and our staff as we work to get you where you need to be as quickly and safely as possible.”

Education Minister Jason Clare says fixing a teacher shortage due to the impacts of COVID-19 and the flu is high on his agenda.

Clare said the shortage was getting worse due to a colder-than-normal winter.

“[It’s] led to teachers being at home crook rather than being in the classroom looking after kids,” he told reporters in Darwin this morning.

“We’ve got a teacher shortage right across the country that’s getting worse, not better.”

He said he would raise the issue with state and territory education ministers when they next met, and that “different states and territories will make their own decisions” about what the rules are around vaccinations and teachers.

The Age reported yesterday that unvaccinated teachers will be back in classrooms in Victoria next week, and parents will not have the right to take their children out of school because their teacher is not vaccinated.

The Australian sharemarket has moved higher in morning trade, with falls in energy and mining stocks holding back the index. All other industry sectors rose following an up-and-down session on Wall Street overnight.

The S&P/ASX 200 was 0.3 per cent higher at 12.21pm AEST, adding 18 points to 6,526.50. Energy stocks declined by 2.1 per cent as oil prices again fell overnight amid investor fears that interest rate rises could drive the US into recession, reducing demand for fuel. Woodside dropped by 2.9 per cent while Santos was down 2.1 per cent.

Falling iron ore prices weighed on the mining sector, with Chinese futures declining on Wednesday to their lowest level in 16 weeks according to Reuters, due to worries about an oversupply of steel in China. Iron ore giant BHP lost 2.5 per cent, Rio Tinto shed 2.6 per cent and Fortescue declined by 3.4 per cent. The entire materials sector lost 1.9 per cent.

A decorated Anzac war veteran who tried to give away more than $1 million worth of property and cash to a Melbourne hairdresser in the months before his death did not have sufficient mental capacity to alter his will, the Supreme Court has found.

Norman William Maddock, OAM, died in June 2020 aged 97. He had suffered a series of falls and been diagnosed with a psychotic disorder, paranoid ideation, cognitive difficulties and low mood in the two years before his death.

Judge Kate McMillan found Maddock’s solicitor should have been more suspicious about the woman who stood to gain from Maddock changing his will, Marcia Reynolds, and said the evidence before her suggested Reynolds was “pushing the outcome” of the elderly man gifting her his family home.

Chief Medical Officer Professor Paul Kelly has called on Australians of all ages to spread the word about the health dangers of e-cigarettes.

The national health and medical research council released its latest report on e-cigarettes on Thursday and NHMFC chief executive Anne Kelso and Kelly spoke about the report at a press conference.

The report found “the vapour from e-cigarette devices can be harmful and there is limited evidence that e-cigarettes are effective at helping smokers quit.”

It further found that scientific evidence showed that:

Kelly said nicotine was often found in vaping products sold as being “nicotine free” and health experts thought it was a serious, emerging health issue.

“One in five people aged 18 to 24, who had never smoked, reported having tried e-cigarettes,” Kelly said.

“Only one in three people who used e-cigarettes reported that they use them to help quit smoking, so most people are using them recreationally.

“One of my colleagues has said recently that e-cigarettes are the next big health issue after COVID and I think that’s a really important statement to take on board.

“Please discuss this evidence with your children, your nieces and nephews, students, players in your football or netball team, your brothers and sisters – we need that conversation out there. We need these matters to be barbecue stoppers.”

NSW Labor leader Chris Minns says this week’s state budget was designed to address the Coalition’s “teals challenge” instead of enacting real change to target the cost of living and help households.

In his budget reply speech to the parliament on Thursday Minns said Labor would do four things differently: give immediate help to household budgets, grow jobs at home, invest in education and ensure the economy delivers for “the many, not just the lucky few”.

“A Labor government will back NSW jobs with a comprehensive package of measures to get the job done,” he said.

“We’ll do things differently…creating jobs in NSW through local procurement and domestic manufacturing, ending the obsession of offshoring jobs…and stopping the gutting of regional TAFE.”

”After four premiers, four treasurers, 12 budgets, the Liberals and Nationals are going to ask for 16 years in government,” Minns said.

“The treasurer and the premier still think they can somehow announce their way into a better future for the people of this state. The future isn’t shaped by spin.”

Minns said it was time to “turn the page on this government and begin anew,” adding “there is a better way.”

If you can’t see this video, please refresh your web browser.

WA Premier Mark McGowan is due to speak to the media at 11am AEST.

If you can’t see this video, please refresh your web browser.

Lowe spoke earlier this week and said he wanted to see wage growth “with a three in front of it” as a way to avoid wage inflation, while unions are calling for wage growth that is closer to inflation so Australians are not left worse off.

“I don’t know how he can say that – wages on March 31 were 2.55 per cent up, how is that anywhere near what he is saying in 3.5 per cent?” McManus told RN Breakfast this morning.

“To think somehow that the system is going to deliver across the board pay increases of 5 or 7 per cent is Boomer fantasyland and not realising that a whole system would be incapable of delivering that.

“We do not have centralised bargaining in this country. It would not be possible for that to happen. Even if the union movement wanted that to happen this year., it’s not possible to all of a sudden turn around and have a 2 per cent, 2.3 per cent overall pay increases and be delivering that amount of money.

“I think what he is saying is that in future, if you deliver pay rises above inflation, then it could lead to inflation – I think it is a warning rather than saying it is a problem right now.”

The delayed trial of Bruce Lehrmann, who is charged with allegedly raping Brittany Higgins, will now happen in October.

Former ministerial staffer Lehrmann is facing one charge of sexual intercourse without consent, relating to an alleged incident in Parliament House in 2019.

His trial in the ACT Supreme Court was supposed to start on June 27 but was delayed on Tuesday amid a fresh round of public commentary after Network 10 journalist Lisa Wilkinson won a Logie award for her interview with Higgins about the allegations.