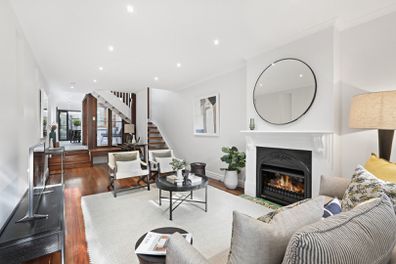 Every week there are loads of interesting and beautiful properties that hit the market. But what listings stand out from the fray? Using data from Domain, we reveal the properties Aussies have been loving the most.

The most popular homes across Australia this week include a breathtaking Neo-Classical palace in Brisbane, heritage conversions in Perth and Sydney and a Provence-inspired manor in South Australia. Some of these pads need to be seen to be believed.

A historic workers’ terrace in Sydney’s inner suburb of Darlington has topped the charts of most-clicked listings this week, to become Australia’s most popular home.

Built circa 1885 for workers at the neighbouring Eveleigh Railway Workshops, the “spacious urban sanctuary” is located in a whisper-quiet setting tucked away between Redfern village and Chippendale’s cultural hub.

Retaining the heritage facade but undergoing a huge reinvention on the deep dual access block with secure parking, the terrace home has been rebuilt from the ground up.

The home just sold for $1.825 million. For the full listing, click here.

You’d be forgiven for thinking this veritable palace would be found in Versailles, but it’s actually tucked away on a one-hectare parcel in Brisbane’s Robertson. And you’ve never seen anything like it.

This exquisite Neo-Classical mansion is an architectural masterpiece of grand scale and historical pedigree.

It’s as good a time as any to be selling in Brisbane, with Domain’s latest House Price report showing Brisbane is now the fastest-growing capital city property market in Australia, after house and unit medians skyrocketed 32.1 per cent and 9.3 per cent respectively in just one year.

Spread over 26,000 square metres of pristinely manicured grounds, ‘Yathalia’, as it’s called, is a staggering six-bedroom, six-bathroom mansion like no other in South Australia.

In fact, the most-viewed listing is also the state’s most expensive, with a $12 million asking price for the Yatala Vale spread that blends Romanesque and French Provincial design.

We’d also be remiss if we didn’t mention the fact the sprawling estate has parking for 25 (yes, 25) vehicles.

This original circa 1914 home in Claremont features the best of both worlds – and people are noticing online.

The front heritage part of the home includes two street-facing rooms with original fireplaces; one study and the other a primary suite, complete with a spacious walk-in robe and a beautifully appointed modern ensuite.

This section of the home also enjoys character features like soaring ceilings and polished Jarrah boards, high skirting and ornate ceilings roses. Three further bedrooms are located in their own wing in the modern extension.

There, you’ll be greeted with wall-to-wall windows and bi-fold stacking doors flood the space with light. There’s a north-facing living and entertaining area, plus an alfresco and pool area outside. Reticulated gardens include limestone garden beds with roses, ornamental pears and potastrums for privacy screening.

Kelly
Five amazing north Dublin houses on sale under for €250,000 – Dublin Live
This Santa Cruz estate has been in one family for almost a century, now it’s for sale at $7.9M – SFGATE