‘Demon mansion’: Creepy abandoned estate with tragic past for sale for $660000 – nine.com.au – Nine 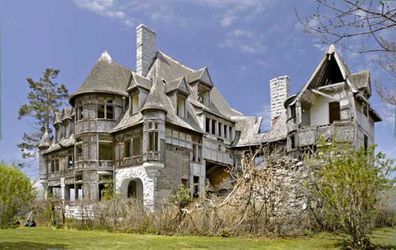 A dilapidated 11-bedroom mansion in Upstate New York likened to the ‘Amityville Horror House‘ has been languishing on the market for years. The home recently had a price cut to $US 495,000 ($660,000) for those brave enough to live in it.

Abandoned for 70 years, the home is eerily secluded on almost seven acres of land on Carleton Island, close to the Canadian border, with water views from three sides.

Despite the attractive price tag, the property will likely need a million dollars’ worth of work to transform it to its glory days. While there is a stone foundation, the wood frame upper floors have “deterioration” and there are no bathrooms, as per the listing.

But even if a buyer with deep pockets is out there, there’s the creep-factor to contend with, something Reddit is quick to point out with users branding the home a “demon mansion”, “haunted” and “super creepy”.

READ MORE: This Queensland footpath is asking over $400,000

The once-grand mansion was built by architect William Miller in 1894 as a summer vacation home for businessman William O. Wyckoff.

Wyckoff had made his millions helping the Remington Arms Company develop their version of the newly invented typewriter, according to House & History.

Unfortunately, it was never the dream home Wyckoff hoped it would be.

In 1895, after spending just one night in the home, he tragically suffered a heart attack and died at the property. This was just a few months after Wyckoff’s wife also reportedly died of a heart attack.

The home was then passed down to their son, who used the estate until about 1927.

The Great Depression hit soon after and the family lost much of their fortune. They sold the villa to General Electric, who took ownership in the 1930s with hopes to use the property as a company retreat – but those plans were also abandoned thanks to the first World War.

According to the listing, contractors were then allowed to go in and remove materials such as doors and windows, essentially looting the property. The marble cladding from the tower base was also taken.

The home was left to the elements, which leads us to its state today.

Reddit has sprouted multiple subreddits discussing the villa, with users weighing in both cracking jokes about its terrifying look and saying it’s “just a fixer upper”.

“I’ll take it even with the demons. Can’t be worse than having roommates,” one user quipped.

“It has good bones.. Unfortunately they are scattered and buried around the property!” another said.

“Still much cheaper than a 1 bedroom apartment in Sydney, Australia,” a redditor remarked.

The crumbling house has been compared to the Dutch colonial home known as the Amityville Horror House.

It gained the grim moniker as the scene of a family massacre in Amityville, New York, in 1974.

Robert DeFeo Jr was just 23 when he murdered six members of his family, including his parents, as they slept.

The crime horrified America, with the home was left abandoned until 1975 after new owners, George and Kathy Lutz, moved in with their three children.

Paranormal claims soon followed, including slime oozing from the walls, Kathy levitating, and a priest’s hands bleeding after he tried to bless the property. The Lutzes fled soon after, siting “demonic spirits”.

The real-life horror story inspired a bestselling book and a series of Hollywood movies.