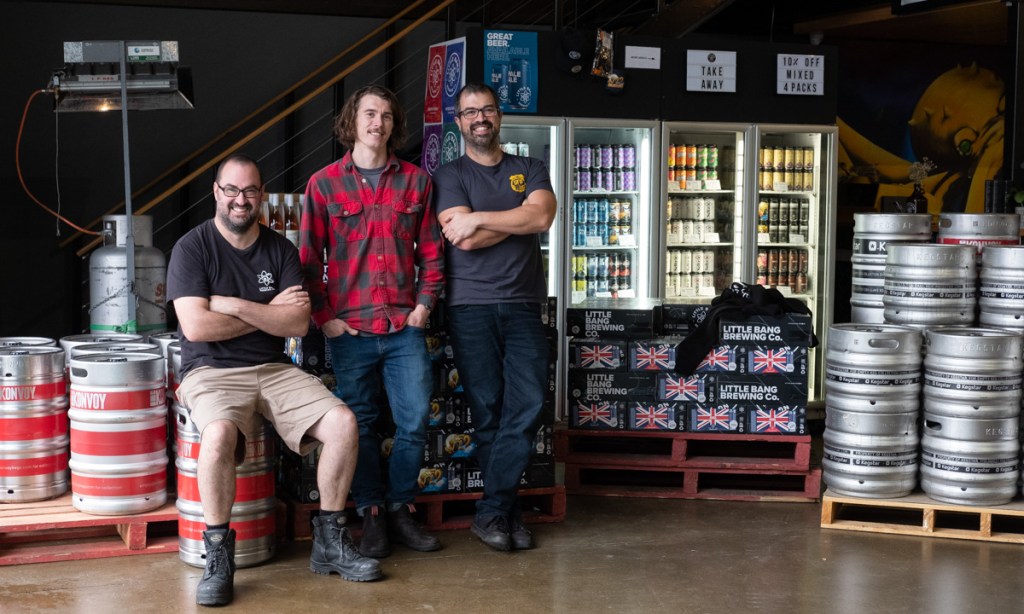 The fledgling hospitality consortium, led by Ed Peter, Martin Palmer and Brett Matthews, was established in 2020, with the purchase of North Adelaide’s The Lion Hotel. It has since built a portfolio of more than 10 pubs across South Australia, with Little Bang being the first brewery in its collection.

Little Bang founders Ryan Davidson and Filip Kemp declined to say how much their business sold for, but as part of the deal the two are now shareholders in Duxton Pubs Group.

Fil has left his post as head brewer, but will continue to consult with the company. Ryan will stay on in the business as co-CEO, a position he shares with new head brewer and co-owner Oscar Matthews, formerly of Uraidla Brewery.

Ryan says the melding of Little Bang into the South Australian Duxton group is “too perfect”.

“Honestly, what’s so amazing about it is it’s so South Australian still,” Ryan says.

“And everybody at every level is fully committed to Little Bang remaining completely independent and setting its own agenda and its own destiny, which is just wonderful.”

Little Bang Brewing launched in November 2014, first operating out of Fil’s garage. This was a boom period for craft beer, and demand saw the business expand operations to Union Street in Stepney in 2016, and once more, to its current location on Henry Street, in 2018.

The duo’s aspiration for growth hasn’t diminished, which is why, since moving to Henry Street, they kept their ears open for investment opportunities. They started more seriously seeking a buyer over the last year, for two reasons.

Firstly, Filip and his wife, Katie, who is also in the business, had long planned to move their family over to Perth by 2022. This deadline has been hit, with the Kemps now officially living over the border.

In addition to this, Fil and Ryan could also feel the business was ready to progress into the middle-tier of Australian craft breweries. But, because of the shifting dynamics of the business, Ryan says they weren’t interested in “going into an enormous amount of debt with a bank”.

“We had our houses on the line and our heads on the chopping block for a very long time, as a tiny little business,” Ryan says.

“As a family business, our primary thing was to work as soon as possible to where that was not the case… and we have no desire to ever go back to that place.”

Under Duxton’s ownership, Ryan hopes to guide Little Bang out of the “gorgeous little multi-faceted craft space, where several of the 400, 500 beers that are in the craft bottle shop shelves [sit],” he says, and into the middle tier, where “you’re really starting to get into competition with… your Stone & Woods, your Brick Lanes, Young Henrys”.

“Within South Australia, particularly over the last few years, we’ve started to take steps out of that, where you might see our stuff more regularly on tap,” he says.

“That’s a very competitive space where margins need to get cut, and it’s a real volume game.

“You need to start working very professionally, with rigid contracts, and have serious capital for marketing and stuff like that.”

Ed said in a press release Duxton’s purchase of the brewery will mean “the Little Bang team can grow through our reach in the hospitality space, while continuing to brew the amazing beers they are known for”.

“We’re super excited to work with them on growing the Little Bang brand – which will still continue to be available in existing hotels and bottle shops, as well as a host of new ones both within South Australia and nationally,” he said.

Oscar, who is the son of new owner Brett, comes into the project after taking a few months out of the industry. He began to wind down his responsibilities at Uraidla Brewery in August last year and officially left the company in January.

As Uraidla’s founding brewer, building that business from scratch was a “pretty demanding”, he says. But his time away has given him “enough time to really think about what I want to see” in the industry.

“One of the biggest drivers of my motivation is to work with a new brand,” he says.

“Because I enjoy working with the Uraidla brand and sticking within the style guidelines of what we were doing there, but this provides a whole new opportunity for creativity.”

Ryan says there will be no noticeable changes to Little Bang operations from the consumer’s perspective.

“[Duxton] can see from the retail side, if it ain’t broke, don’t fix it. This is running really nicely. How do we just get it to run even better? On the production side, the idea is to grow,” Ryan says.

While the Little Bang core range will continue, as will its focus on seasonal releases and specialty styles, Ryan says the business will look for ways to meet the needs of Duxton Pubs’ venues. And, as head brewer, Oscar will begin to incorporate his own tastes into the beer lineup.

“I sort of created my own style in brewing, as Little Bang has as well, so naturally there’s things that I would like to bring to the table from what I’ve learnt throughout my experiences in brewing,” Oscar says.

“I hope to impart some of my influence throughout the beers that we create ongoingly, but, of course, Little Bang has a very strong following for all of its beers, so there’s no intentions to go and drastically change something that people love.” Fil, who built Oscar’s first home brew kit, says his successor has a reputation for the “high-quality of [Uraidla’s] beers” and is a “perfect fit” for Little Bang.

“Someone that’s got high-quality work, background in beer, and having fresh eyes on the recipes and the brew sheets and processes is always a good thing to happen,” Fil says.

Aside from occasionally consulting, Fil will be taking time away from brewing, heading out west to reinstate a citrus orchard. We catch him at the brewery just before he’s set to make the trip to WA, and he says, though the acquisition is an exciting development, letting go is “gonna be difficult, for sure”.

“Ryan and I built this from day dot in the garage in Glynde, and built then at Union Street, and built it again at Henry Street. It’s going to be hard to walk away from it,” he says.

“But the only thing is at least I can walk away knowing that it’s going to be in good hands. It’s not going to be left to some guys who used to run pizza shops or something like that, and suddenly they’re coming in and they’re going to completely destroy it.

“I’ve got a lot of confidence that, yes, it is going to continue to be a great brand, and, hopefully, it’s only going to get bigger and better from here on in.”

Ryan is also optimistic about what the sale means for the company.

“When we first got serious about sounding out people, we actually put together a relatively short list of candidates to approach, and Duxton was pretty high on my list to start with,” he says.

“So many people in the craft brewing industry have their eyes on Lion Nathan or Asahi as that end game, and, look, not to pooh-pooh anyone that’s done it, but it just feels… like a loss each time it happens.

“None of us can deny that when Pirate Life went, when Little Creatures went, when Stone & Wood went, you sort of go, ‘Oh. Well, I guess I’m going to drink someone else then’. You know? It feels like they’ve moved out. And I just don’t think it’s necessary.

“There’s a few brands, like Young Henrys, et cetera, that have that independence and have achieved scale, through a lot of investment and changing their business structure a lot, and I think that’s really admirable.

“Duxton, they’re a force to be reckoned with. You see the way that they’re moving in Adelaide, and you see what they do with their pubs, especially. When you’re close to the industry, delivering beer to a lot of pubs and working with a lot of pubs, you just see the way they operate, and I’ve just had such an admiration for it since day one.”