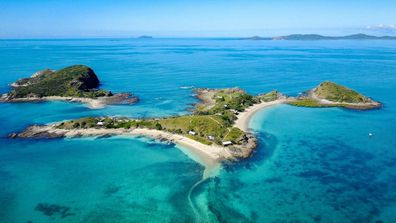 For most buyers out there, a beach house will never be more than that – a place to occasionally spend time at on weekends and holidays.

As a result, the average Aussie isn’t going to spend more than their primary residence’s worth on a secondary, weekender home.

So, more often than not, the most appealing beach houses out there are the bargains – those diamonds in the rough that offer maximum bang for buck.

READ MORE: How to choose the best investment property

But what happens if you’re a well-heeled individual? What does a beach house look like if money isn’t a factor?

Well, strap in; because these are five of the nicest and most expensive beach houses for sale right now.

Okay, technically, this property does have a beach house, but we’re bending the rules a bit with this one.

This listing is so exy because it’s actually an entire 60,000-square-metre private island that’s up for grabs, not just a staggering beach house.

In reality, Pumpkin Island is a privately operated, award-winning, off-the-grid resort… and that’s why we think it would make an amazing beach house/getaway for anyone with more than nine figures in the bank.

Just a stone’s throw away from Byron Bay and sitting on a staggering 56,000-square-metres of verdant, bucolic land, this residence in Coopers Shoot is another exceedingly unique proposition.

Currently set up as a corporate retreat, the residence boasts a plethora of features for both private and commercial purposes.

It’s also got stunning views and a pool and lounge area we could spend hours (or days) in.

Presenting perhaps the ultimate interpretation of an oceanfront beach house, this abode in North Avoca is Hamptons-chic and oh so fabulous.

Aside from being a mere few metres away from the ocean, other benefits of this home are a quaint master bedroom that looks out to the sea, a stylish and versatile living and dining area and a decidedly inviting pool.

Being less than 100 kilometres away from Sydney and only a short one-and-a-half-hour drive, this residence could be a brilliant home away from home.

Set on an elevated cliff’s edge in the idyllic coastal township of Whale Beach, this beautiful three-storey house offers perhaps the best views of any property on this list.

17a Malo Road boasts five bedrooms, five bathrooms and a whole heap of visual allure, with sweeping vistas out to Whale Beach’s sandy shores and the Pacific Ocean.

Benefits of the lavish home include a master retreat, single car garage with an external car turntable, sizeable pool and a prepossessing kitchen, living and dining area.

Featured on the cover of Queensland Homes magazine and Nine’s very own Australia’s Best House, this one-of-a-kind residence caps off this particularly expensive list with aplomb.

The brainchild of notable designer Chris Clout, the award-winning property was voted the best home on the Gold Coast and the fourth-best in Queensland by the Courier Mail in 2021.

Aside from an uber-rare 20-metres of prime beach frontage, the jaw-dropping home boasts an amazing infinity pool, four bedrooms, four bathrooms and parking for five.