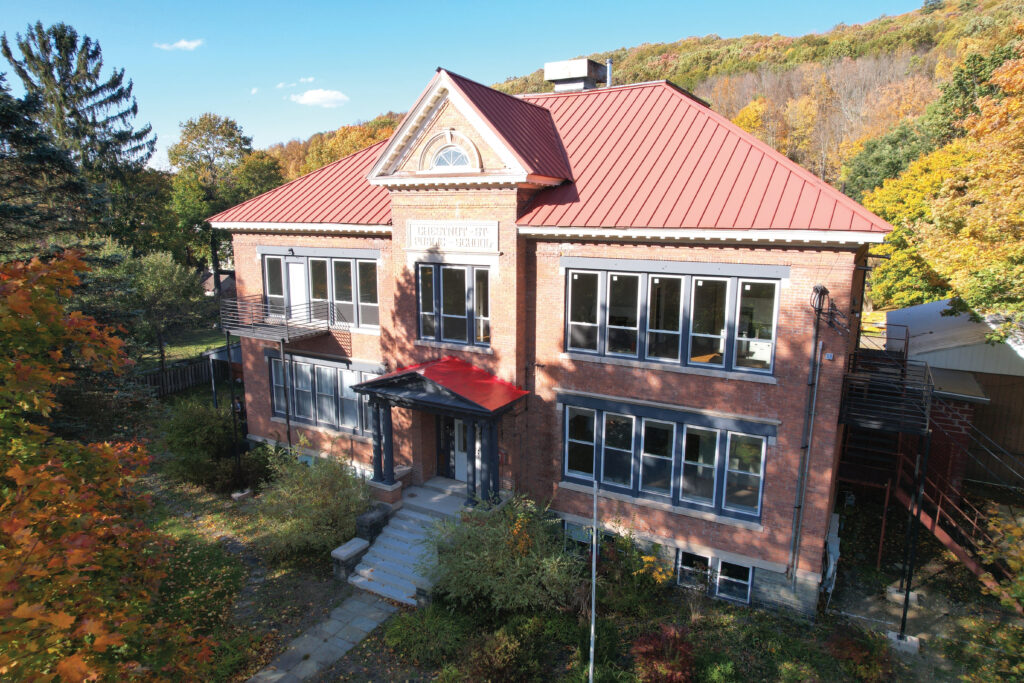 ONEONTA – We wanted to create something that we would be proud of owning and something that the community needs.” This was the impetus behind Chestnut Hill Estates, with 10 new luxury apartments now housed in the former Chestnut Street School.

David Weaver, who owns the property along with partners John Imperato and Anthony Carimando, said the trio had discussed working on a project together before finding the right property, which they purchased in December of 2021.

“We all grew up in the area and are lifelong residents. I was born and raised in Oneonta and John and Anthony grew up in Schenevus,” Weaver explained. “John and Anthony have owned rental properties together for 15 years and I have owned rental properties for close to 10 years with other partners. When we toured this location for the first time we all saw the great potential with the building but also the land to build more units.”

The former Chestnut Street School, located at 290 Chestnut Street, opened on September 8, 1914. There were 75 students and Miss Iva Smith was the school’s first principal.

“We have had a lot of people reach out to us saying they went to school there,” Weaver added.

According to City of Oneonta Historian Mark Simonson, Chestnut Street School closed in June of 1966, with its students—and those of the former Plains School, at the corner of Chestnut Street and Winney Hill Road—attending the new Greater Plains School that fall. The building housed Oneonta City School District offices until 1996, and is the former location of the Calvary Hill Retreat Center.

Weaver said Imperato and Carimando, who own a construction company together, started work on the building as soon as the sale of the property was finalized.

“The 10 apartment units are all unique in the main building because we had to fit into the basic configuration, which made it challenging for John and Anthony but also made the finished product amazing,” Weaver continued. “Two of the units upstairs are similar but still have a few different features to give them their own charm.”

There are eight large one-bedroom apartments, a studio and a three bedroom, two bath apartment, Seaver said. The plan going forward is to have two more buildings constructed. Those buildings will have 10 units each, which will all have the same basic layout, he said.

Weaver and his partners retained historic features where possible.

“We kept all of the original floors upstairs, just sanding and refinishing them. We also kept a few doors that were original to the school. Upstairs had an auditorium with a stage. John and Anthony converted that space to three apartments. They kept the stage in and that is where the studio apartment is. The building had a lot of old slate chalk boards and original lighting that we couldn’t keep. Luckily an antique dealer wanted them and they will find other homes,” Weaver said.

All of the apartments have granite counter tops, dishwashers and washer/dryer units. The upstairs apartments boast 15-foot-high ceilings.

“We also have a lot of safety features, including keyless entry with a face recognition option, a sprinkler system throughout and central station fire alarm,” Weaver said. “Since we are still in the first stages of the project, we don’t have a concrete plan of what exact amenities we will offer. A lot of that will depend on the clientele. We have talked about putting in a playground, pickleball courts, basketball courts or even garden plots for each apartment.”

Weaver and his partners are proud of the finished product and, after a small break, they will continue onto the second building, which is phase two of the project.

“It was amazing for me to come by and see all the work John and Anthony were doing and the transformation that occurred throughout the year. They spent countless hours at the building creating something that is really special for the community,” Weaver concluded.