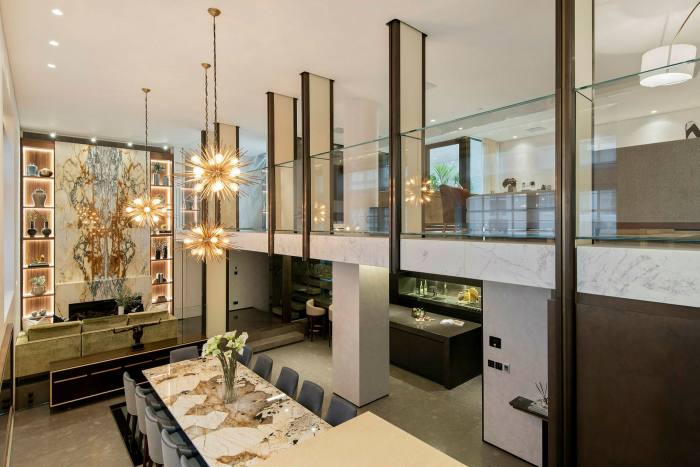 Where At 777 Sarbonne Road in Bel Air, a neighbourhood in the foothills of the Santa Monica Mountains. LAX is about 30 minutes away by car.

What Spread between a main home and a guest house on just over an acre of grounds, this property has seven bedrooms, 11 bathrooms, a cinema, wine cellar, bar, seven-car garage, infinity pool and spa. Its location allows for panoramic views that stretch from the San Gabriel Mountains to the Californian Channel Islands.

Why Available to purchase alongside this mansion is an art collection, which includes a Non-Fungible Token (NFT) art gallery, as well as physical works by contemporary Californian artists Andy Moses, Shane Guffogg and Jimi Gleason, among others.

Who The Agency / Savills

Where On Bourdon Street in the Mayfair district. It’s 10 minutes’ walk to Oxford Circus and about 15 minutes to Hyde Park. Heathrow airport is a 45-minute drive.

What A six-bedroom, six-bathroom house with more than 5,780 sq ft of living space over four floors. Highlights include a glass lift and a double-height atrium, which is overlooked by a mezzanine drawing room. An additional chef’s kitchen can cater for parties, and the lower ground floor houses a 10m pool, a steam room and a gym.

Why The property was once home to Terence Donovan, the photographer who, during the Swinging Sixties, captured famous faces including Jimi Hendrix, Monica Vitti and Jean Shrimpton.

Where On Rue de Lille in the 7th arrondissement, moments from the Seine. Paris Charles de Gaulle airport is about an hour’s drive.

What A 350 sq m hôtel particulier, dating from 1823. Renovated in a contemporary style, it features three en suite bedrooms, a study, drawing room and a reception-cum-living area with ceiling height of 7 metres. In the basement there is a sauna and a guest bedroom.

Why The property’s impressive spiral staircase was designed by contemporary interdisciplinary artist Jean-Michel Othoniel, who works across drawing, sculpture, installation and photography. The property is right next to the Musée d’Orsay.

Where In the village of Old Westbury on Long Island’s North Shore. Manhattan is about an hour by car, JFK airport half an hour.

What Set on 6.5 acres, this five-bed Palladian-style home is centred around a converted art studio under a vast skylight. A tunnel links it to a caretaker’s cottage.

Why Designed by Beaux-Arts architects Delano & Aldrich in 1912, the studio was the creative hub of sculptor Gertrude Vanderbilt Whitney, who founded the Whitney Museum of American Art.

Where In Arenzano on the Ligurian coast. It’s about five minutes to the sea on foot. Genova City airport is a half-hour drive, and Milan Malpensa just over two hours.

What A six-bedroom, six-bathroom villa, with 750 sq m of living space arranged over three levels. Each floor has independent access to the outdoors. Surrounded by terraces, a water garden and olive groves, the house is built around a large millenary olive tree.

Why This artful property was built in the 1960s by Milanese designer and architect Marco Zanuso.