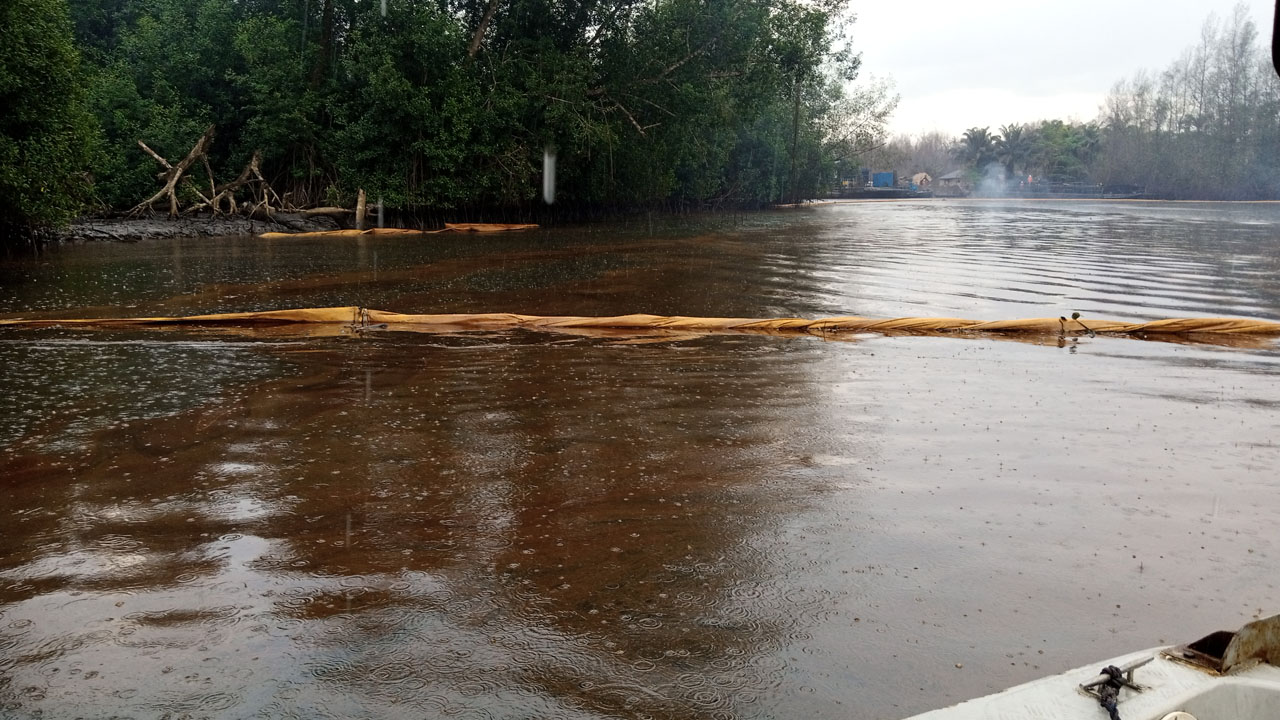 There are communities in the Niger Delta that would compete to have the dubious notoriety of being the oil spill capital of the world due to the regularity of oil spill incidents they experience.

Ikarama community in Yenagoa Local Government Area of Bayelsa State is one such community. A major community in the Okordia clan, it is also well known for its location on a road that forks off the East-West Highway at Zarama where the highway crosses the Taylor Creek.

Travelers on this highway regularly have to squeeze their way through the colourful, massive and boisterous Zarama market that emerges at this intersection on Fridays. It is a day when traders and farmers in communities within the region bring their wares and produce for sale to buyers who come from far and near to buy yams, plantains and bananas, cassava products, vegetables, meat, seafood and an assortment of imported goods.

The market is so massive and speaks out on the highway that it literally takes up one wing of the bridge that straddles the Taylor Creek at this point. The colourful umbrellas under which business is transacted here are a sight to behold. But it doesn’t give any hint of the oil pollution that swirls in the swamps and creeks beyond.

Before the advent of oil exploitation activities at Ikarama it was a community that was fertile both for fishing and farming. It’s location in the Bayelsa National Forest marked it out as a custodian of a rich biodiversity. The benevolence of nature has been brutally threatened by oil over the past decades.

When oil spill is mentioned within Okordia clan in Yenagoa local government area of Bayelsa State, Ikarama and neighbouring communities including Kalaba readily come to the mind of anyone familiar with the history of oil spill incidents in that axis of the Niger Delta. Ikarama community is host to Shell’s Okordia manifold, oil wells and pipelines owned and operated by the Nigerian Agip Oil Company (NAOC).

Reports of oil spill incidents are as numerous as they are disturbing. At a visit to an area impacted by oil spills in the community way back in 2014, it was amazing to see that those who pretended to have cleaned up the spill had merely turned the soil over to cover up, not clean up, the pollution.

The grass over the area shone from the stubborn oily sheen that refused to be hidden and the fumes in the air was so thick residents whose houses were close by had to relocate for safety reasons. I was accompanied on that visit by Alagoa Morris, the ace monitor of the despoliation of the Niger Delta environment and Jay Naidoo, an African elder, activist and politician, who was the founding Secretary-General of the Congress of South African Trade Unions (COSATU), and later on a minister in the government of President Nelson Mandela of South Africa. Naidoo went on to reference the ecocide in Ikarama in his excellent book, Change: Organising Tomorrow Today.

Naidoo was shocked by what he saw at Ikarama, Rumuekpe and Ogoni. He wrote in his book that rather than paralyzing him, what he saw made him determined to do something to help restore the land to the rightful owners, the people who work with their bare hands and only take from nature what she yields to them. He continues in that struggle to this day by organizing and mentoring young people as key knowledge holders on our continent.

My last visit here may have been in 2014, but I have studiously followed the pollution trajectory here from way back to 2007. And that is why I am returning to Ikarama today, eight years after. A major incident occurred in February 2018 when a resident was hit by the pungent smell of crude oil, and the sound of spraying liquid, on his way to farm. That spill was traced by the Joint Inspection Visit (JIV) to have resulted from what is termed “third party interference.” The response to this incident was brutal as officials of the Civil Defense Corps descended on the community in the wee hours of one morning, shot a youth in the hand and on both legs, and arrested and took away a lady in lieu of her husband, a logger, who was away in the forest at that time.

Mr Udoki Orukori, the arrested woman’s husband told reporters then that he did not know where his wife had been taken to. “I was informed it was Civil Defense (that arrested her). For now, I don’t have money, so there is no access for me to go after her.”Mr Orukori’s extreme exposure and helplessness illustrate the state of affairs of community people all over the Niger Delta who have to confront multiple security forces in the murky waters of the region and in the murkier business of securing oil and gas facilities.

Before the February 2018 incident, the last observed spill in the community was recorded two years earlier and that one was attributed to Shell’s equipment failure. From that month the incidents of spills resumed with the regularity of a tom tom. There was another major oil spill here in the evening of 11th June 2018 at Shell’s Okordia Manifold. That spill spread to neighbouring Kalaba community. The cleanup of the spill was slow and ineffective and over subsequent months the swamps remained heavily impacted with ensuing floods further compounding its impact and spread.

Although both Shell and ENI have a fair share of spills here, a majority of the pollution incidents have occurred from facilities of SPDC, notably from theAdibawa/Okodia delivery line, Okodia/Rumuekpe pipeline and Okordia Manifold. And most of the oil spills have occurred close to residential buildings, farms and farmlands raising serious concerns about locating oil extraction facilities and activities within communities.

Expectedly, community persons have been experiencing diminishing returns from their fishing and farming endeavours, besides the onerous health impact of living in a highly toxic environment. Chief (Mrs) Ayibakuro Warder, a community woman in Ikarama, told environmental monitors in August 2021, “Our crops don’t do well again, particularly the cassava and plantains. They die off after planting and we have to replant repeatedly. Tuber plants like cassava and yams no longer yield like in the past. The yams rot away before harvest. We feel this could be a result of crude oil in the environment as oil spill-impacted sites are not properly cleaned up and remediated. We have not been experiencing this before now. Sometimes, in some areas of our farmlands, as we till the soil we see crude oil. That is what we are contending with and, as fisher folks and farmers, this is a threat to our means of livelihood and health.’’

The story has not changed. When Benjamin Warder tried to construct fish ponds in March 2021 and again In April 2022 he was greeted by crude oil oozing from the swamp. According to Mr. Warder: “In March 2021I brought an excavator to prepare a fish pond for me. What I saw was quite unfortunate. I saw crude oil coming out from the ground. I raised alarm by informing the Environmental Rights Action/ Friends of the Earth Nigeria’s Alagoa Morris. Thereafter NOSDRA, Shell and ERA came and some spots in this environment were dug. And it was very glaring that crude oil was coming out from the ground. As a community person, I felt that since even the multinational oil company had come here to witness crude oil coming out from the ground they would come back to carry out soil tests on the entire environment and carry out proper remediation of the environment. But unfortunately, from August last year till now, nothing has been seen or heard about it from SPDC [Shell Petroleum Development Company]. That notwithstanding, I decided to try and invest again this year and brought an excavator on 26th April 2022. And you know the heavy cost of bringing a Swamp buggy down here from Yenagoa; it is expensive. And when we excavated this time, what we saw was worse than the one of 2021.”

The depth of the environmental destruction at Ikarama and adjoining communities is so extensive that it cannot continue to be covered up or ignored. The people have borne the burden of irresponsible environmental despoliation by oil companies and other entities and this must be stopped. First, the oil companies must change their horrendous habit of not adequately monitoring and securing their pipelines and their futile efforts at covering up or underreporting oil spills. They must review and adequately clean up and restore the environment wherever oil spills have occurred over the years. The UNEP report on the assessment of Ogoni environment clearly exposed the false claims of cleanups by the oil majors.

This is the time for the government and the oil majors to take immediate steps to commence an environmental and health audit of Ikarama and the entire Niger Delta and commence a thorough cleanup of the entire region. Funds for this endeavour should be deposited in a dedicated account for this purpose. No entity must be allowed to divest without first making reparations for its ecological transgressions. Anything less is to deny the people their right to live and flourish in their land. Remaining deprived, neglected and poisoned in an environment that nature has so well endowed is a paradox that Ikarama must be spared.

Nnimmo is director HOMEF. He was at a field monitoring visit and community environmental monitoring training at Ikarama, Bayelsa Stare, Nigeria on 16 June 2022.