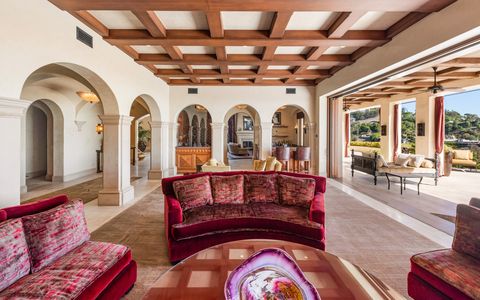 In the world of real estate, not all homes have a fascinating backstory, but there is the occasional dwelling that boasts no shortage of celebrity connections. One such example is a Beverly Hills estate that was just listed for a whopping $85 million. The property—built on the same site where the infamous Manson murders of Sharon Tate and three others took place—is currently owned by Full House creator Jeff Franklin. It’s listed by Million Dollar Listing Los Angeles stars Josh and Matt Altman.

Deemed the Cielo Estate, the mega mansion consists of nine bedrooms and 18 bathrooms across 21,000 square feet. Franklin purchased it for $6 million back in 2007 and lived there until 2021, when he relocated to Miami. Prior to hitting the market, the estate was available to rent for $250,000 a month. The abode was recently used to host the reception of former Full House actor Bob Saget‘s funeral.

Before the sprawling pad was built in 1996, a smaller home was situated on the lot. It was there that actress Sharon Tate, hairstylist Jay Sebring, Folger coffee heiress Abigail Folger, and aspiring writer Wojciech Frykowski were murdered by members of the Manson cult in 1969. Director Quentin Tarantino took inspiration from the tragic incident by bringing parts of it to life—including a similar ranch-style house—in his 2019 film Once Upon a Time… In Hollywood.

Amenities of the jaw-dropping property include a hair salon, a billiards room, a bar, a movie theater, a spa, a gym, a 75-yard pool with three waterfalls, two hot tubs, a lazy river, a koi pond, a 35-foot water slide, a private grotto, and a detached guesthouse—not to mention an underground garage that can hold up to 16 cars.

Interested in moving into the notorious home? You can find the listing here.

This content is created and maintained by a third party, and imported onto this page to help users provide their email addresses. You may be able to find more information about this and similar content at piano.io