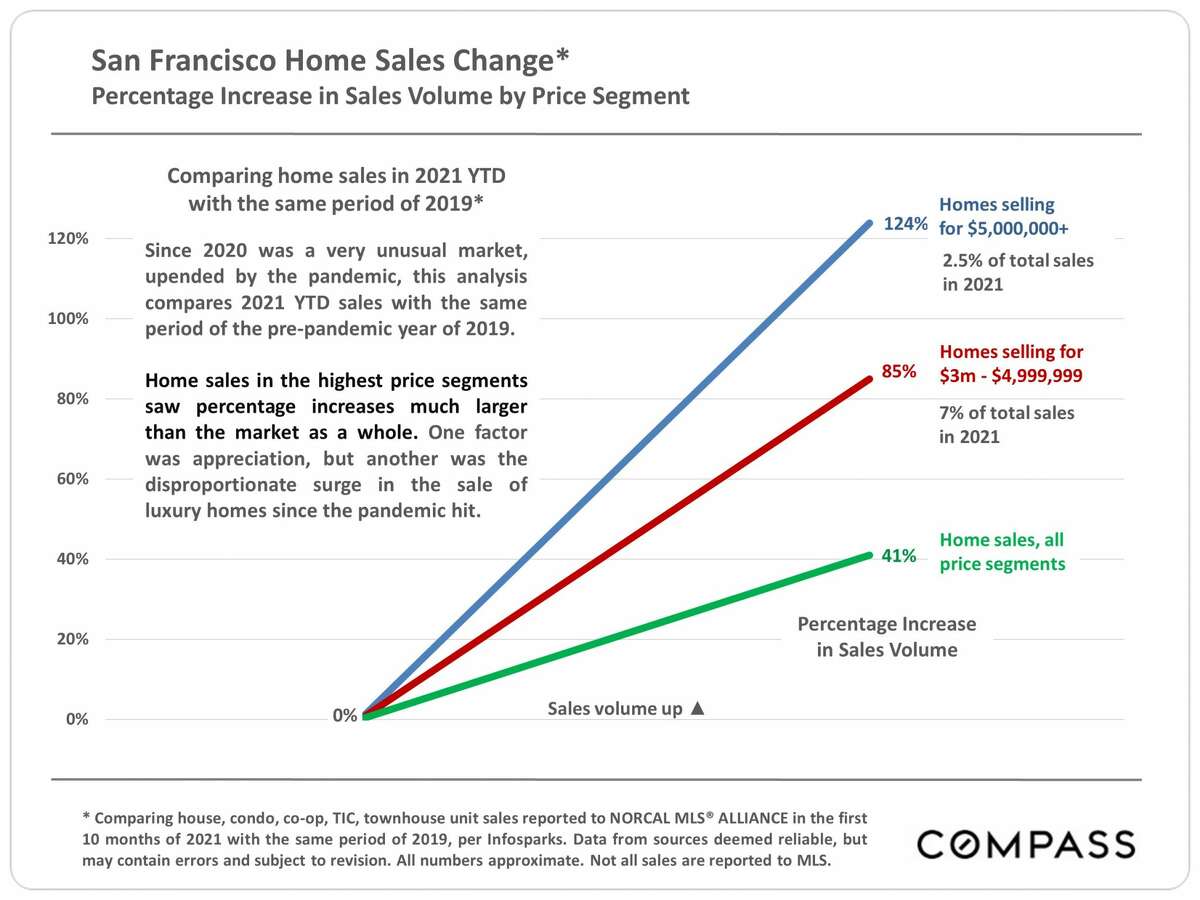 What do San Francisco’s most expensive residential home sales in 2021 have in common? It’s not a look — they are all very different in terms of aesthetics and style. It’s not age — some are mid-century while others are well over 100 years old. So what is it? In a word: popularity. This year was all about the speediness of sales of luxury homes in San Francisco, with properties over $10 million dollars in hot demand, most selling quickly and some in as little as a few weeks.

The median sold home price for all property types in this year-end quarter is $1.528 million (this includes tenancy in common, condos, co-ops, land, multi- and single-family homes), up 7.6% year-over-year compared with December 2020. On the elite end of the spectrum, luxury properties continued to enjoy extreme (and expensive) popularity this year, with multiple homes closing at prices well over $19 million in San Francisco proper.

According to Compass’ December 2021 Bay Area Market Reports, we’re better served looking back to 2019 to understand the dramatic nature of this trend, since 2020 was such a strange anomaly. The pandemic was an unforeseen and unprecedented factor in the city’s real estate prices, as well as home buyer behavior. Data shows, strikingly, that the surge in luxury home demand and price points from before the pandemic to now is likely to continue as the pandemic itself surges on.

Alexander Clark, founder of TheFrontSteps Real Estate, confirmed that the 2020 emphasis on private sanctuary continued this year.  San Francisco home buyers with means are investing in larger, more expansive residences, and paying premium prices for the right location, extra outdoor space and extra rooms inside their homes that can be used for work, exercising, hobbies, extended family and guests. “More people are placing more value in their main residence than ever before,” Clark said.

As to who’s paying these luxury prices, Clark said “it appears the buying profile in SF is much the same. Finance, tech, real estate, generational wealth, and those ever-present buyers with an unwavering desire to be in San Francisco.”

Among the top six home sales this year are properties ranging from $17.45 million to $43.5 million. Here’s what their multi-million dollar prices bought their new owners:

San Francisco’s second-highest sale this year was 3414 Washington St., a stately mansion that closed at $24.95 million after only 20 days on the market. The home is a rebuilt-from-the-studs mansion of 8,930 square feet, offering six beds, seven baths in Presidio Heights. “Consider that the last time this address sold was in 2003, for just $3.7 million — about $5.56 million after inflation,” wrote Adam Brinklow of TheFrontSteps.

The third-most expensive sale was 490 Avila St., which closed at $19.75 million. This home is across the street from Marina Green, making it a strong contender for best location in the city for folks who want quick access to a beautiful outdoor space. The home has seven beds and 10 baths, with 7,809 square feet.

Just $25,000 less is 2590 Green St., which took fourth place this year when it sold for $19.5 million. There are five bedrooms and eight bathrooms inside this 8,630-square-foot mansion. After previous listings didn’t yield a sale, this year the Pacific Heights mansion sold in just three weeks.

Coming in sixth at just $5,000 less than the home in fifth place is 2820 Scott St., an Italianate beauty built in 1904 in Cow Hollow. Behind its butter yellow facade are seven beds and nine and a half baths, with a sprawling 16,000 square feet of living space.

Anna Marie Erwert writes from both the renter and new buyer perspective, having (finally) achieved both statuses. She focuses on national real estate trends, specializing in the San Francisco Bay Area and Pacific Northwest. Follow Anna on Twitter: @AnnaMarieErwert.

Kelly
The most expensive celebrity house sales of 2021 – nine.com.au – Nine
8 of the most luxurious properties for sale in Gloucestershire – SoGlos