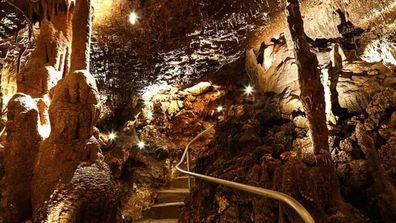 “Do you love Natural Bridge Caverns? ”

That is the intriguing opening line on a weird and wonderful Texas property listing, and yes, the cave house has rocked one buyer’s socks off.

The property at 24811 Creek Loop, San Antonio, which has its own natural cavern system, has an offer pending on the Zillow ad.

The owner spent $US87, 500 ($122, 000) to incorporate the natural cavern into their estate, with excavation, stairs, and the addition of spot and feature lighting and electricity, the listing reveals.

READ MORE: Opinion: ‘This might actually be the time… to just make it a little bit fairer’

A gazebo in the backyard is a spot to bask in the fresh air before venturing underground, via a trapdoor in the lawn, with a deck.

The surrounding land is conserved, providing a verdant and protected frame around the block.

The house itself has four bedrooms and is decorated in a traditional style, with oak, magnolia and mountain laurel offering shade.

The listing states that prospective buyers could only view the cavern with an appointment with the real estate agent.

“I love any house with a built-in batcave, ” one commented.

Another said: “When Bruce Wayne has to downsize”.

“Either amazing or super haunted, ” said a fan.

“Probably a great place to hang out on hot summer days! ” another said.

Texas’ caverns are a major tourist attraction. The best known is the Natural Bridge Caverns about 30 minutes north of San Antonio, named for the bridge shape created at the entrance to the caves when a sink hole collapsed.